After a a busy year at Elsie Inglis Day Nursery and Preschool, our award winning practitioner, Kate Hubbert discusses her time with the company so far.

This year will be my 10th year working for Bright Horizons!

From a young age I always had a passion to care for young children, I was always inquisitive to the way they developed new skills from such a young age and was eager to study and find out more! I always knew that I wanted to work in the childcare profession and begin training as soon as I left school. Working in a nursery class within a school as part of my training and witnessing first hand the progression and development that children achieve through sheer determination and the supportive staff secured it for me. Yes it can be hard work, however the hard work proves successful when you see children do something for the first time or achieve a goal they didn’t think they could do makes it worthwhile and very rewarding as a practitioner.

I feel I have achieved a lot in the last 10 years and I am proud to see how much I have grown from the 21 year old that came to Scotland independently to start my first job as a senior for Elsie Inglis nursery.

I started off at Elsie Inglis nursery where I took on leadership in the baby room before moving to support the two’s room. While working at Elsie Inglis I completed my PDA at Edinburgh College. I moved from Elsie Inglis to Cramond Bright Horizons where I took on the role of toddler senior before moving to support the Anti preschool and completing my journey there within the preschool room. While at Cramond I completed my leadership course as part of Bright Horizons in house training, this was a great opportunity to work alongside other colleagues, share practice, and help me develop my confidence further and set me in good stead for my next challenge. As part of the Cramond Preschool team we were nominated for the NMT award, a colleague and myself attended an interview and went through a process of elimination, which resulted in us qualifying as runners up.

From Cramond I was promoted to the position of lead practitioner based back at Elsie Inglis, I took on this role in January 2016. I work with all rooms and support staff and my manager Sharon. Part of my responsibilities to name a few is to develop and provide an enriched planning process inline with the Pre-birth to three and the CFE and provide positive learning tools for children in our care. I develop new initiatives and carry out monitoring tools to help us as a nursery reflect and embed positive changes. I am very fortunate to work within a great team who recognize each other’s potential and support each other, my manager is a great leader and role model who has helped me develop in many new areas through her guidance, support and trust.

As part of my role I am pleased to be able to support other nurseries within the company with my most recent been Rutland who were preparing for their Education Scotland Inspection. I have supported Hamilton nursery as they developed their preschool room and various other nurseries to help implement planning tools and new initiatives as well as support new seniors in their roles. I have been able to share many of the initiatives I have implemented at training events I have attended as part of Edinburgh council and have played a part in pilot groups again with Edinburgh council and worked closely with our QIO (Quality Improvement Officers).

A magic moment for myself during my time with the company was to have been chosen for two Bright Horizon awards at our annual Awards of Excellence events, the first in 2007 was the Rising Star award and the second in 2010 was the Spirit award. I am also extremely pleased to have been recognised and nominated for Nursery Practitioner of the Year award, which I received in London in 2016 at the Nursery World Awards. These have meant a great deal and I appreciate all the support I have been provided with through Bright Horizons and how this has helped me grow as a leader. 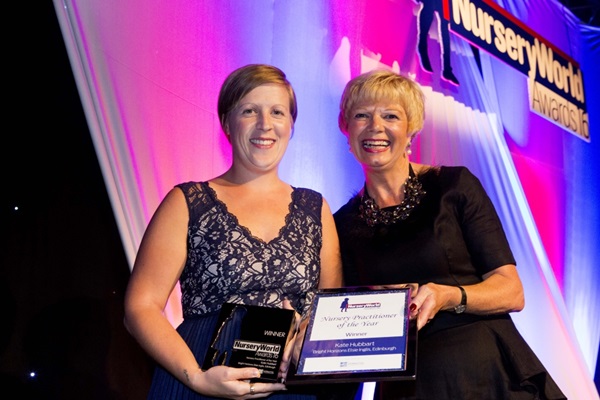 I am extremely passionate about childcare and the role we as practitioners play in supporting the children in our care as well as the parents who entrust us to care for their children and educate them to the best of our ability.

Taking care of children and playing an active role in their development within the early years is one of the most fulfilling roles you can play.

I would highly recommend Bright Horizons to anyone who is looking to further their career as a nursery practitioner. Bright Horizons offers a supportive network and provides ample opportunities for growth and development as an individual.  They have an extensive training programme and it is through this that employees are able to unleash their potential. Bright Horizons recognises staff as individuals and supports work life balance, staff are recognised for the hard work and commitment they put into their roles and this dedication and hard work is rewarded.