The Importance Of Role Play

The Importance of Role Play

For children role-play can take many different forms and serve as many purposes.

During role play children imitate the people around them by recreating scenes from everyday life and acting out familiar roles which enables them to realise in their imagination the things that sometimes cannot be realised in reality.

From this, imaginative play develops and children develop the ability to incorporate narrative into their play. As this play develops you will start to notice that their play becomes more complex and the narratives which are created include more characters and episodes.

Talking and listening skills developed through dramatic play form the narratives which are the basis of reading and writing. Opportunities to develop reading and writing should occur within meaningful contexts in a role play area.

In role play situations children can experiment with the language they have acquired as well as new vocabulary they are introduced to by staff supporting their play.

Imaginative play is more than children having fun. It has a crucial part to play in their intellectual and social development. The ability to make one thing stand for another, to picture things that are not there, are critical features in the growth of both thought and language.

Empathy is also developed through imaginative play. This is what is happening when children play mums and dads or schools, and it is play of this kind that helps children overcome feelings of fear and loneliness. 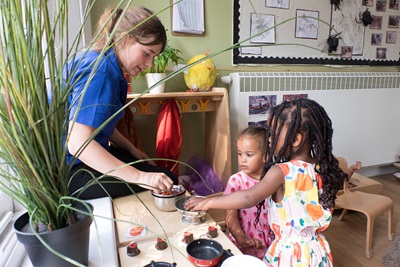 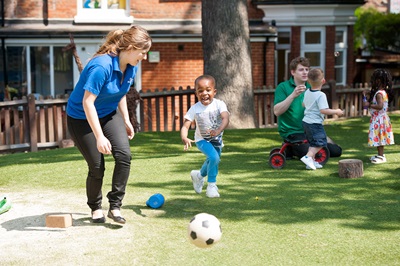 We enhanced our area and really noticed the difference: Pimlico’s Story

“Enhancing our toddler room Home Corner has been a huge success for the children, and the play and observations we managed to get from it were brilliant!”  Paul at Pimlico Nursery

“Our Toddler Two room is primarily full of boys – although this is often exciting and can offer the most brilliant of observations there were times when the boys would not use the play with the equipment effectively and they would become boisterous.

We consulted the children about the resources we needed and made sure that we purchased everything we needed first so that we could adapt and change the environment in one afternoon.

Since the change in the environment, the level of children’s concentration, play, interactions with each other and adults have been fantastic. The children although excited are calm and use the tea set to mimic home observations.

As practitioners we were able to carry out some brilliant observations which led us to scaffold to further enhance the area and also the children’s development.

On a side note, parents in this room had never really made any comments about any other changes we had done to the environment – this was different, we had so many lovely comments from parents about how the amazing the changes were and how much of a massive difference it makes to the room.”  Jodie from Pimlico Nursery