For today’s blog about Christmas in Czech Republic, we are delighted to introduce our guest blogger, Phil Cardon. Phil is married to Marketa, our Digital Marketing Coordinator, originally from Czech Republic, who moved to Manchester in 2002. In 2008 Phil spent Christmas with his in-laws…

It never occurred to me how some nations can have very different customs, until I married my Czech wife and was invited to spend Christmas with her family for the first time.

Every Christmas Market had stalls with huge tubs full of water and fish, mostly carp. It’s the Czech tradition to eat fish on Christmas Eve. What I didn’t expect was that most Czechs actually keep the fish alive in the bath until Christmas Eve! As strange as it sounds, it’s totally fascinating. I was very excited to be experiencing the traditional Czech Christmas, so we brought our carp home in a plastic bag and released it in the bath. The fish immediately took to its new surroundings and looked quite happy, until the following morning when my father-in-law skilfully killed it. It was served deep fried and with potato salad later on in the evening. Surprisingly, it actually tasted quite good, I just wasn’t fond of the small, sharp bones. 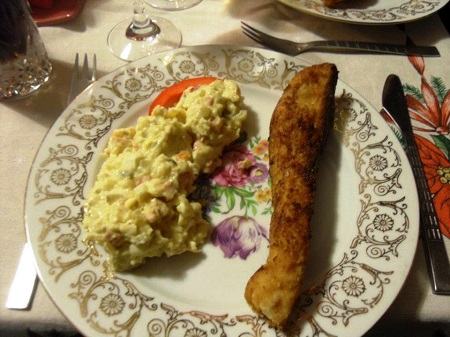 Czech children believe that Jezisek (baby Jesus) is the one who delivers the presents together with the Christmas tree. In contrast to the modern globalized world we live in with Santa Claus appearing on many adverts, it’s amazing how this tradition hasn’t been spoiled by the consumer marketing. I found it very touching how it’s up to each child’s imagination what Jezisek looks like, because nobody actually sees him when he delivers the presents. He usually comes in through an open window whilst the family eats their Christmas Eve dinner and leaves with a sound of a bell which is the signal for the children that he came.

It’s probably the only day in a year when the pubs and bars are deserted, as everybody embraces the magic of Christmas Eve and being together as a family. The evening itself is filled with many different customs, rules and superstitions, all to find out what the coming year has in store for the family.

I had one of the most enjoyable and memorable Christmases when I visited Czech, and back in England we carry on with many little, Czech traditions with our children, apart from the fish in the bath!

Time to time, when we share the story with our friends, my wife still gets asked: “And how did you have a bath?” to which she calmly replies: “In with the carp of course!” 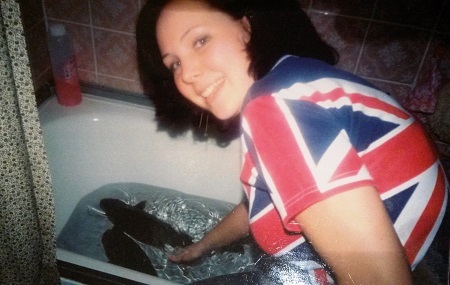 Marketa with the carp on Christmas Eve!