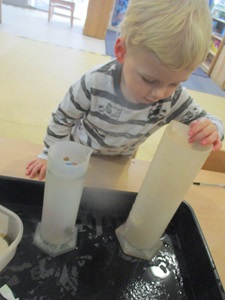 Children at Bright Horizons Crewe Day Nursery and Preschool recently took part in an activity to see which items that float or sink.

The children placed a variety of items into jugs of water and watched to see what happened. The activity was part of the Bright Horizons’ Growing Scientists enhancement which helps children to identify scientific activities that occur in their everyday lives.

“We also did some estimating and spoke about which items we think would float and which items would sink,” said Deputy Nursery Manager Nicola Harvey. “Some of our older children decided to record their findings of what floated and sunk.”